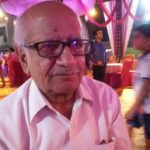 The idea of creating this site came in the mind of Mr. Bhushan Kumar who is the founder of this site. He is M A in English. He retired from a  central government department as assistant director.

He was born in Bhiwani - known as  Chhoti Kashi. Most of his service period was spent in Haryana and he served in Dak Bhawan  Delhi for about 3 and half years of his service before retiring. While working at lower and Middle level management posts he was regarded a silent and dedicated worker. But he was  also regarded a  strict disciplinarian. He was interested in  reading and writing since his school days. He also worked as editor of a  local fortnightly newspaper for some time.  He had  also written Hindi novel entitled "Pratishodh ki Jwala" and the same was  published by Amar Prakashan. He also remained  active member of many  societies formed  for the promotion of literature and poetry in his native town.

Like many of the Indians he was born in a spiritual family. His childhood was spent in the company of Sadhus and Sanyasis who were regular visitors to his house and used to live there for weeks together. His father was very fond of them and they were always offered comfortable boarding and lodging in their house. Hence there was always a spiritual atmosphere in his house and melodious voice of bhajans and kirtans always pleased the neighbors who called his father Bhagat ji.

The family had a spiritual Guru who used to live in Rajpura town of Punjab. This family Guru had first introduced him to meditation when he was a student of 7th or 8th class. He has many wonderful stories to tell about these Sadhus and Sanyasis but those are reserved for some other occasion for paucity of space.

He was a brilliant science student and he wanted to become a doctor and even his teachers in school believed that one day he will be a famous doctor. But his family circumstances compelled him to join Humanities stream for studies so that he could earn some money to manage his family expenses. He started taking tuitions in his spare time. He became interested in communism. He became a student leader and developed revolutionary outlook. Whatever little time he could spare from his hard life was spent in the local office of the Socialist Unity Centre of India- A Communist Party founded by Sh. Shibdas Ghosh, Sh. Nihar Mukherji and others on 24th April 1948 with its headquarters at Kolkata.

His life again took a pleasant turn when he was a student of BA final year. He was a good public speaker and participated in almost every declamation contest and debate held in various colleges of Haryana. He won many prizes and trophies in such contests. As a prize to one of contests held in his own college, two books were among the books given to him in prize:

He wanted to exchange these books but that could not materialize due to non availability of other books at that time. He read the books rather reluctantly.These two books changed his life totally and forever. He became voracious reader of spiritual and astrological books. Finally he took Osho sannyas on 22nd October 1988 in Kairthal Mandi( Rajasthan). He had already became a regular reader of The Astrological Magazine since second half of 1985. He went to Pune and was absorbed in deep meditation as soon as he had darshan of Osho. He was made centre coordinator of Osho Sadbhav Meditation Centre, Bhiwani. He organised first Osho Meditation camp at Bhiwani in 1996 with the help of fellow Osho Sanyasis. Swami Anand Vijay and Ma Prem Archana both from Jabalpur came to Bhiwani as representatives of Osho Commune.

He became life member of Indian Council of Astrological Sciences after a short time of its establishment.Although he did not learn astrology systematically yet he started giving predictions on the basis of techniques given in various articles of The Astrological Magazine. It all started in 1991. He had become a government servant by then. He was now almost free of financial problems and he charged nothing for giving astrological guidance. Soon he became popular in town and  many influential people of the town started coming to him with their various problems. His only speciality was that he did astrology honestly and free of cost. He was frank and told clearly to consult some worthy astrologer if he did not know answer to their problems. He also tried to learn astrology systematically from some local Pandits. But  unfortunately no Pandit became ready to  teach him due to the reasons best known to  them only.

He  did regular worship and meditation. He sincerely prayed to God to help him in giving right guidance to those  who came to him for help. If he did not know how to examine their problem astrologically  he told same frankly to the concerned person but added that sincere prayer to God and help to the needy will surely be beneficial in solving their problem.

After many years and as late as in 2012 he started studying astrology in Bharatiya Vidya Bhavan on the advice of an officer of Indian Postal Services who was his immediate boss when he was Superintendent of Post Offices. Many books of Shri K N Rao touched him deeply  and he likes all books and articles written by him. Spiritual ideas of Shri K N Rao and his method of teaching has influenced him very much. He is still a  research student in Bharatiya Vidya Bhavan and is sincerely indebted to the teachers of Bhartiya Vidya Bhawan. Now he is doing full time astrology after his retirement. He has a long list of correct predictions which he proposes to write later on with horoscopes and techniques of prediction.

He has three male children. All are married and settled happily. Most of the time he lives alone in his home town Bhiwani and is interested in spirituality and astrology only. Many people tell him that they feel full satisfaction, contentment and mental peace on meeting him.

Mr. Manoj Kumar B tech(IT) of Kurukshetra University Kurukshetra is our Honorary Technical Advisor. He is working in a prestigious IT company since 2003. He was brilliant student  and a good public speaker during his student life. He is a  spiritually inclined young man with aptitude  in astrology. He is also learning astrology in Chandigarh Chapter of ICAS. He has many awards to his credit  in his professional life also. It is hoped  that he will also reach the peaks of Glory in the field of astrology with the passage of time and will remain interested in spirituality.